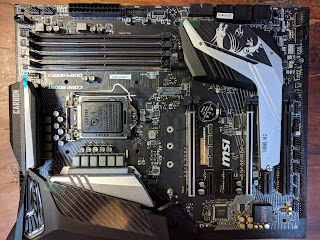 The night before, I made myself  a detailed step by step plan on how I would iteratively install and test the components.  I went to bed overexcited and a tad slightly apprehensive about applying thermal paste.

Once all the components rolled in from Amazon, I cleared off the dining room table for starting the build. Unboxing raw components definitely had a excitement I haven't felt with fully formed consumer electronics like a PS4 Pro. When did RAM get so big and beefy? After years of laptops, it's fun to handle a motherboard again. I was impressed with how much was crammed into this MSI z390 motherboard except for the dragon decal is completely gratuitous and did not add to any badassness. The i9-9900K was smaller and thinner than a triscuit.  Hooking up sockets and power cables was intuitive. The most fun part was popping in the DRAM and seating the core i9-9900K in the LGA1151 socket.

Everything from Amazon had arrived with 1 day shipping except the higher grade Kryonaut Thermal Grease which wasn't due to arrive a day later.  My plan was to use the included Noctua thermal paste, do testing and then repaste with Kryonaut the second day if temps were not satisfactory. 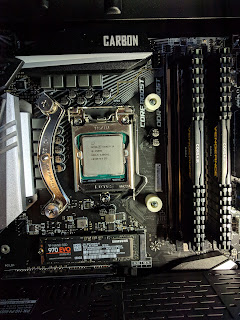 I had watched many a youtube video with the mesmerizing application of grey goop with my favorite being from Gamers Nexus which reassured me that technique did not matter that much as long as you didn't squirt an obnoxious amount.  I really really wished I had watched JayZTwoCents video on how to build a PC the wrong way before I did this. Even to his surprise, doing all the wrong things like just smearing on gobs of thermal paste with his finger, separating the cooling sink and reattaching actually did not affect the resulting temps that much. I was totally OC (not overclock, obsessive/compulsive) about a great many things that did not matter in the end and was tripped up by things that I didn't expect.

Before I could power on the system, I had to install the CPU fan. The absolute worst(THE WORST) part was installing the Noctua fans which took a ridiculous 5 pasting attempts mainly due to the high standoffs. The whole process of reinstalling involved having to unscrew the mounting frame to unseat the cpu which caused the backplate to fall off, popping off the cpu, cleaning cpu and the heat sink, re installing the backplate which required flipping case on it's side and re mounting frame, seating the cpu, squeezing out some thermal paste, pressing down the heat sink. Also you had to hook and unhook the two fans if you had done a full install. It took half a box of coffee filters with isopropyl alcohol to scrub out a wasted $10 worth of thermal paste. 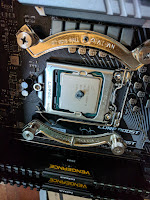 Attempt 1: I followed the Noctua instructions to the letter and put a small 3mm pea of the included Noctua NT-H1 thermal paste as instructed. I press down but I have this weird feeling it's too little. I pop it open to see an uneven oval. (It's entirely possible that it would have covered everything once it was screwed down....)

Attempt 2: I clean everything up, follow the steps again with a more erm generous helping of thermal paste. However the second screw will not catch at all to the standoff.  My husband who conveniently came home for lunch exerts his large hands over the mobo. He asks me to cleanup everything and so he can test the fit and debug without the thermal compound. He keeps asking me if I didn't seat the CPU right and so it's sitting higher. I keep insisting it's impossible- this LGA socket is idiot proof.
But by mid-afternoon, I had a running computer that had Fallout 4 VR running on it smoother than I ever had seen it.

I guess all those Grizzly Kryonaut commercials on Gamers Nexus and Linus Tech Tips must have worked subconsciously into my brain as I didn't think twice about that.  I won't use liquid metal because it's too nerve wracking and after having cleaned the cpu and cold plate 4 times, I realize the stuff gets everywhere even when you think you are being super careful.

Attempt 4: I open up the heat sink and yesterday's last squeeze was definitely was not enough. I clean it up again and apply the Kryonaut with the included tiny paddle but it's too thick and sticky and clumps up all the wrong places making me worry I'm just whipping in more air pockets in an effort to spread it.  I decide to start over and use the X method instead.

Attempt 5: I unscrew the mounting bars one last time, unseat the i9 one last time, clean both surfaces not as obsessively as yesterday, reinstall the backplate, and mounting frame one last time, totally forgot I want to use an X, and just plop down a fat dollop of Kryonaut goodness. I just screw everything in, do a benchmark and see pretty good thermals(10+F decrease from yesterday) and call it a day.  I now hate and love this Noctua fan since it's quiet and performs admirably.

I had put the fans to left of each tower as placement to the right would causing the blade to run into the motherboard power cable. The old configuration wasn't optimum having the back case fan be back to back with a Noctua fan. I shifted the fans to the right over the memory slots which forced me to pull out the power cable over the top of the stylish blue cable bar. NZXT has gotten some flack over the cable bar being too high and just 2 centimeters lower would have solved all my problems and now my cabling job looks subpar and prevents me from posting on Instagram.  But the thermals are cooler than ever (idle and under load) and so performance over looks wins out. (Also I was not going to unhooking and rehook these fans yet again- the fins are sharp and fingers were all cut up.)
But now I can finally close up the machine, do a closed case thermal test to compare against the open case test.  The machine can now graduate  from the dining table to it's rolling cart into the living room. 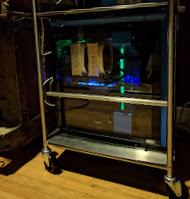 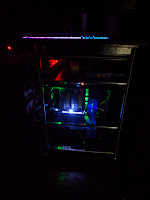 The RGB configuration is for temps, not for aesthetic purposes although it's a pretty night show completely hiding those flesh colored Noctua fans.

On the first day when I installed the GPU, I changed the graphics card setting to PEG and hence going BIOS would just end up as a black screen. I could have debugged this on the first day but decided to do all the VR software install since everything else was working.

Now it was time to start overclocking which meant I had to reset the CMOS which required moving the GPU out of the PCIe slot since a fresh MSI BIOS will not boot with the GTX 1080ti in the slot.
I also wanted to flash the latest BIOS . Since MSI doesn't ship with a jumper cable, I had to use a flathead screwdriver to short the CMOS which didn't make me feel comfortable but was fine.

I could service everything vertical on the cart but I didn't feel comfortable handling my heavy 1080ti hanging off the slot(I have the dread GPU sag of less than a cm) and ended up lugging the case back out on the floor.  But now I know intimately the layout of my rig and got familiar with the MSI BIOS. It just needed another graphics setting. 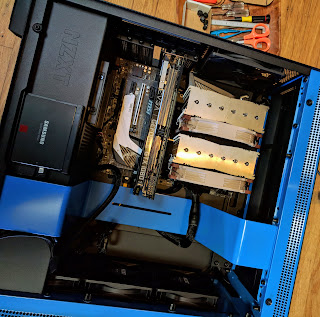