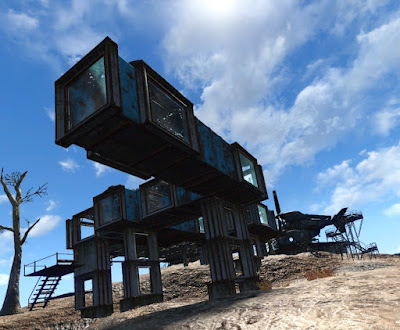 By land mass, Spectacle Island is the largest buildable settlement in Fallout giving the player a lot of flexibility to experiment with more sizeable structures.  The real life Spectacle Island in Boston Harbor was named so for the early natural shape of two vaguely round land masses connected by a thin strip. After decades of trash dumping and a final massive dump from the Big Dig, it looks more like a small "b" or a "9" or worse. Since Fallout 4 history diverges in 1950, the game Spectacle Island is shaped like an amoeba.


Unlike Graygarden, I used this island as more of a blank slate since there wasn't any natively interesting structures preexisting on the island. I used my favorite cleanup mod to get rid of unscrappable garbage piles, Clean and Simple. 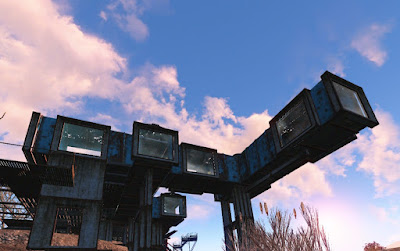 Super mutants, raiders, and complaining settlers can harsh your mellow and I wanted to build a quiet seaside getaway to decompress from all the wasteland violence.  This happily has become my remote outdoor base where I do most of my crafting outdoors without being harassed by NPCs- enemy or otherwise.  Since I am cooped up at home inside a VR headset, I want to spend as much of the game time in the virtual outdoors- radiation be damned.   The first problem was unexpected- after fighting off the waves of oversized mirelurks, I walked around the island looking for possible build sites. The ocean/wind sound was so deafening I could not continue without a sound reduction mod.
. 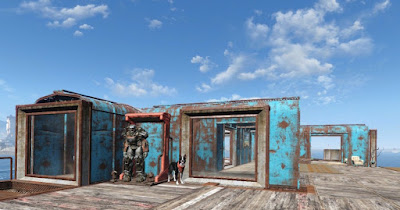 For the main living areas, I wanted to connect railcars together and it's the fantastic Custom Concrete Walls with Window Glass mod that really tied this together. I had originally used SOE institute glass assets which didn't match as well.  The island has an uneven topology so concrete base support was used for some token amount of visual anchoring although the game engine lets you have floating detached structures. Fallout severely limits where you can snap/place items preventing me from putting supports exactly where I wanted. I also didn't want to risk corrupting my save with some potentially unstable mods so the support base is the few places the engine would let me snap.

Most of the sides of box cars are closed off with concrete framed windows so Dogmeat wouldn't fall off.  Even if he is immortal and survives the fall, sometimes he would get stuck in circles underneath the deck and you would see a pair of twitchy ears clipping through- a total immersion killer.

The railcars are connected and placed so each window would have the most pleasing views of itself and the surrounding island. Since there is so much land here, I could have gone nuts and added dozens of railcars for a giant maze complex but it didn't feel right after about 7 railcars and I pared it back as it felt too gratuitous and unwieldy.

I keep most of the interior relatively minimal with most of it is empty except an small armory, lab, bed room, and a guest room- a huge departure from my hoarding Skyrim days.  Most of Fallout 4 exteriors and interiors are so piled with junk that one really needs visual relief in game.  My bedroom has a sleeping bag, chair, suitcase, and a doggie bed. I use the camping mod so I sleep in various places in the Commonwealth but I like to return to this home at the end of my play session.

I originally put the bathroom inside but it's impossible to get privacy in such a transparent structure and I didn't want to cover up anything.  I ended up placing the waste facilities just underneath the bedroom. Why do I even need to add a bathroom in this virtual world? Friend, if you need to ask- the answer is all about raising immersion levels.  Just look at the immersive toilet paper flipped the correct way. I don't actually use it in game and it's out of the way enough that followers will not avail themselves so it's here purely for visual immersion.  (Yes I am aware of "needs" mods but I'm not that kind of player.)  I will have to put in a magazine rack once I have enough collected.

This was the perfect corner for a chemistry station as it's visible from a window in the front entrance hall so you know you have to turn left and not get lost in the maze.  All other crafting- weapons/ammo/food is outside surrounding the original unscrappable workshop.