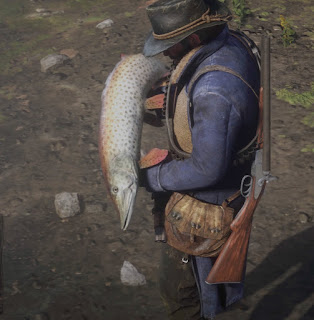 Fishing is a beautifully relaxing activity in the oft violent world of Arthur Morgan.  I love how Arthur mumbles to himself while fishing- and this is when I identify with him most.  I don't like straight up fishing games as much as fishing in character in an open world.  I am the kind of player happy never to finish the main quest just to putter around in the game world with a fishing rod. I only made progress just to unlock the rod and the fishing boat in Chapter 3.

Before you can fish properly, evil Rockstar locks this activity behind a barricade of Chapter 2 missions where your Arthur is forced to undergo all manner of unpleasant violent gang work.  I was so frustrated that Abigail's "Fisher of Men" quest would not appear that at one point I just shot a muskie with a pistol which works well as does a bow and arrow. Due to the water, the reticle will not turn red and auto-aim appears not to work but if you want Arthur to enjoy some grilled fish before the unlock, shooting fish is not a bad way to go.

My husband instead opted to off a fisherman for their rod. The first few times the fishing rod disappeared as the hapless body fell into water.  You have to stealth assassinate a fisherman preferably close to the shore otherwise the fisherman will unequip the fishing rod with a gun. However getting a fishing rod will not unlock any of the bait from the general store and hence you can only fish with bread and cheese until you unlock "Fisher of Men" which lets you unlock "Fisher of Fish" for the special lures. 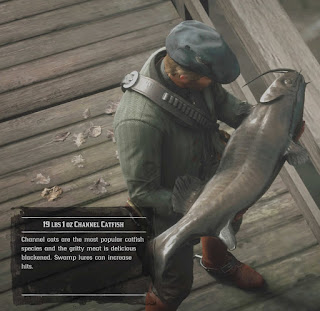 One time I was mauled almost to death by a grizzly while trying to get to a salmon fishing spot. By the time I made it to the water, Arthurs back was bloody with slash marks but he went on gently mumbling and fishing as if nothing ever happened.

The game mechanic and strategy for reeling in all fish appear to be the same- controlling the line with L when the fish is struggling, fast reeling when not. You can easily see where fish are bubbling on the surface and there isn't a huge challenge.  I've never screamed so much in game trying to reel in a big one as I did with this 19 pound channel catfish. Unfortunately RDR2 does not keep track of largest fish caught, only how many so one must take a proper snapshot as proof.

Returning caught fish back to the water gives you 1 good guy point making it a great activity to boost your reputation as perch are just jumping in shallow areas.

I whip out my fishing rod everywhere near a body of water. Try fishing in the polluted waters in Annesburg right outside the train station, you will be surprised Rockstar has added little details.

Email ThisBlogThis!Share to TwitterShare to FacebookShare to Pinterest
Labels: rdr2