The magic of moddable Bethesda open world games lies in the power to repurpose the base game to suit the player that diverges entirely with the main intended gameplay.   I slogged through enough of the Fallout settlement building of pitiful shanty towns to see that kind of grind was not for me. Why waste precious game time looting spatulas off ghouls for that 1 unit of steel and rubber when you can just have infinite build materials at the click of a console command.  Plus there just isn't enough Nuka Cola bottles in all of the Commonwealth to build the kind of structures I wanted.

Fallout 4 didn't have to be just a pseudo FPS/RPG.  When I saw the beauty of the fractured freeway of Graygarden, I realized Fallout 4 VR is a very unique VR construction simulator albeit sited in a nuclear wasteland.  I need not limit myself to lore friendly structures and I could go all out and build whatever a modded system would let me.  However the post apocalyptic wasteland of Fallout contains aesthetically compelling sites of broken infrastructure that I didn't want to cover over but highlight it in all it's ruined glory. 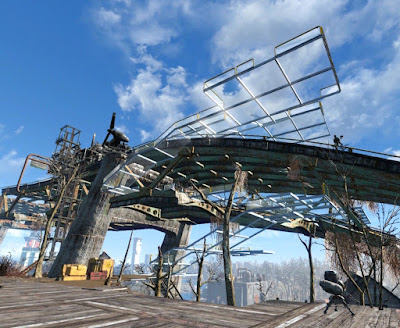 With Graygarden, I felt compelled not to use any mods to artificially clean up or restore the location.   I relied heavily on Settlement Object Expansion Pack using Institute glass assets.   Using glass floors allowed a safe navigable structure (slipping is not a thing in the Creation Engine) and still reveal the these lovingly modeled splintered rebars and dangling bits of concrete beneath. It would have been a high crime against immersion to cover these up. 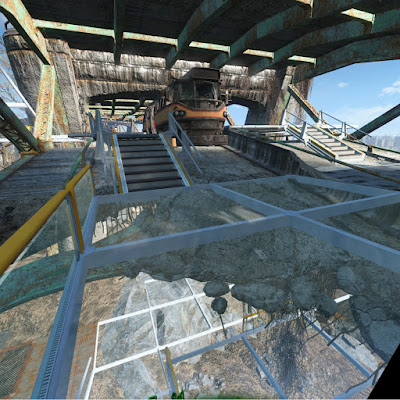 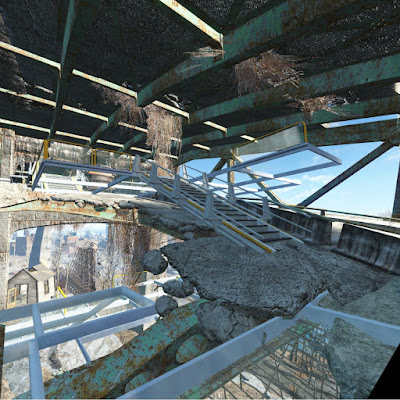 The joy of architecting in the game world is that even though glass ramps are a dangerous slip hazard no one would build in the real world, they work wonderfully in game. Not only do they provide unique views below, these institute glass ceiling assets are wide enough that Dogmeat and other followers do not get stuck or fall off as they do on regular ladders which I had originally before I found the SOE mod.   I was never so completely engaged in VR as I did building out Graygarden and I was able to power through a year end 40 hour real life fast.  Puzzling out how to structure the stairways to the 8 storied top deck was crazy fun as you had to  dynamically building an ascending path.  I fell to my death a few times losing an hour of work when I accidentally selected and moved the item I was standing on which has turned me into an obsessive compulsive saver- but also a heavily modded Workshop wheel CTDs a lot, a lot. 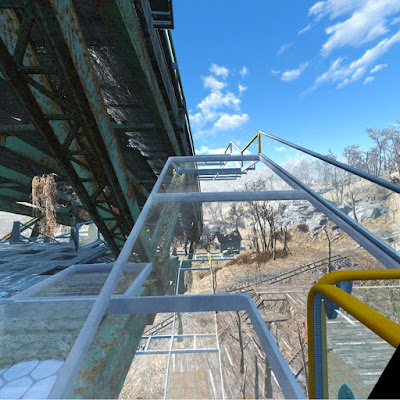 My initial plan was to build as many flat level platforms as possible for settlement building for Sim Settlements. However after building everything out, I realized I didn't want to clutter this space with repetitive immersion breaking NPC settlers. I got enough of them back in Sanctuary Hills and Taffington Boathouse. So I maintain Graygarden as a robot colony true to it's historic origins and plan to make the decks into a museum. 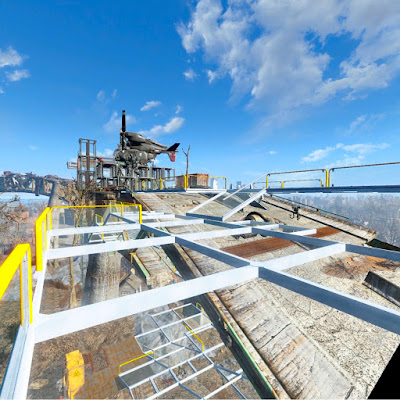 Adding to my immersion, I kept getting hit with heavy radiation storms during construction and trusty Codsworth kept warning me "Radiation Mum".  I could have just flipped the weather to clear but it was fun to build under adverse conditions popping all the Rad-X and Radaway I had stockpiled.  The top deck displays some custom power armor and larger weaponry but most importantly I have a vertibird helipad for the Immersive Travel mod which I use for flying to Spectacle Island.  I went a little overboard with decorative statues on top. 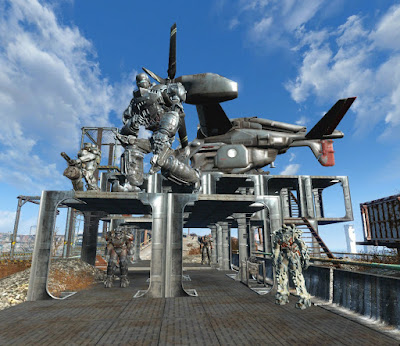 I also added a triple relay of elevators to get to the vertibird without having to ascend via the glass ramps. Sadly I wasted a few hours trying to fix the Bethesda floating elevator button bug trying 2 separate mods. It didn't fix it so I don't use the elevator much. 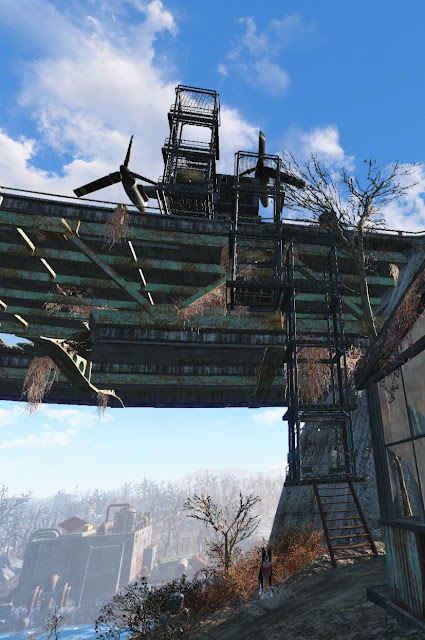 (You will have to take my solemn word that these photos do not do justice to the fun of exploring the actual site in VR. I had originally planned to make a video walkthrough of the site but I realize that my head bobs uncontrollably and since I move through teleportation, a video would be a most unpleasant jiggly experience for the viewer.)