Upgrading to a 3080ti, finally

I've been patiently waiting 2 years to upgrade after refusing the lackluster 2080ti upgrade.  After 10 months of grumbling, entering Newegg shuffles and exhausting vendor sites, I finally held my very own EVGA 3080ti FTW Ultra in my tingling paws. In the rarest of GPU purchase phenomena these days, I actually had a 23% discount to buy MSRP. I won 20% coupon spinning the prize wheel for becoming an EVGA Elite member.  At the time, I thought it was some one week promo for peripherals for an RGB mouse or PSU, not a $300 discount on almost the GPU of my dreams.  I paid around $1200 for the MSRP of $1399 excluding 9.25% CA tax. 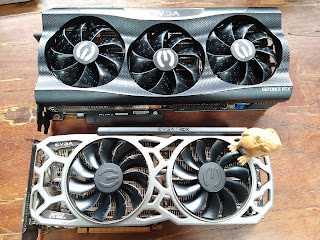 All year, I've been debating the wisdom of paying so much for a GPU. Compared to the 3080 MSRP for $800, this factory overclocked 3080ti $1399 is a terrible deal yielding barely 10% in gaming performance for 75+%  cost. But that 3080 $800 MSRP is tots imaginary and I was entirely grateful for overpay a moderate amount to a legitimate vendor.  I said to myself, "What a steal!" as this model had been reselling for ~$2500 on ebay and Amazon.  Also EVGA has something no other AIB partner has - a golden 10 year extended warranty for $60 so I'm going to use this card way past where it dies a natural death.

How did I even get one? 2 weeks ago the morning of the 3080ti launch, I woke up at 5:45am and pushed F5 hundreds of times for 2 hours on the overloaded EVGA site.   And despite the grumpy grumps on reddit who said we would have to wait in the queue until winter, here it is.

All morning I giggled like a school girl giddy with excitement that the thing I desired most all year actually was in my paws.   The LED is set to display 3 zone thermals for GPU, memory and power with blue being the safe idle temp under 50C. If you recognize the flesh colored sandwich, you will know I value functionality over vanity. Noctua forever! 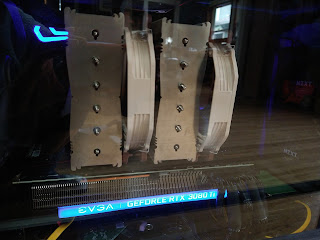 What is the biggest buzzkill for a new GPU owner? The honeymoon didn't last but first let's cover the good.

The raw compute power is more than adequate for my gaming. 4K Witcher with Ultra everything settings looks amazing. I guess I could have played those settings on the 1080ti at 30-45fps. I was trotting around in the Blood and Wine DLC and the floriferous scenery and excessive grass really does me right. Of course I turned on Hair Physics to see that grey ponytail bounce. 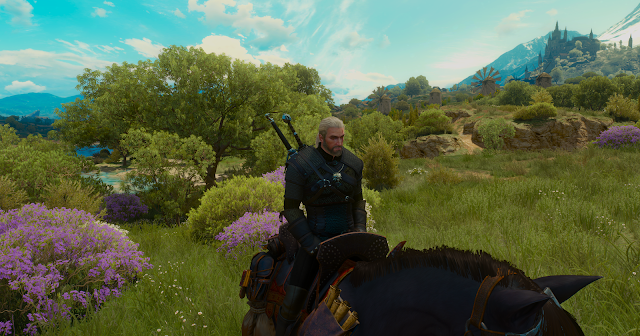 I knew prior to purchase the 30 series ran hotter than any GPUs prior with the GDDR6 particularly prone to overheating.  But actually seeing parts of the card go above 90C even if it's within spec made me uncomfortable.  At first I was trying various other configuration means with under volting and more aggressive fan curves.  Even more worrying was heat dissipation for all surrounding components.  The RAM, SSD, HDDs surrounding the card definitely ran 5-10C hotter.
Some on reddit had replaced the air cooler with an AIO cooler and had recommended me the same. One fellow said he saw 10C improvement if that. But the solution was far simpler and easier.
I opened up the front of my case and vacuumed up the dust bunnies and temps were magically under control with the GPU under 72C but the memory max higher at 82C and hotspot being 77C when running 3DMark tests. My games normally don't run that hot and I could clamp down power to 80%, run even yet cooler and see no game performance difference since my 4K monitor could do no more than 60Hz.

My  main impetus to upgrade was to be able to upgrade my OG Vive to a nextgen headset.   The 3080ti definitely alleviated some performance problems for Fallout VR. But heavily modded Bethesda games can be CPU bound that you cannot pay your way out of with a beefy GPU. I was still suffering the same low rates in heavy NPC areas(Goodneighbor, Riften), at least I was doing it in higher resolution. 200% SS definitely is clearer and better looking than 150%.

I put Alyx on ultra(from high) and didn't notice a significant visual improvement. Valve has done an extraordinary job making Alyx look amazing even with the 1080ti. Same with RDR2 that they have managed this game to look good at almost any setting. 4K ultra didn't necessarily look that amazing to my previous settings. But when I first played RDR2 on a PS4, I was constantly amazed at how good it looked even back then at fake 4K.

Cyberpunk 2077 - RTX looked incredibly realistic but it doesn't make me want to play this game anymore. I don't think I would have enjoyed this game any more or less with RTX.  It takes more than shiny reflections to make me love a game.

I only have 3 games in my library that support RTX (Control, Metro Exodus, CP2077) and the added benefit of RTX doesn't make me want to play them any more or less.

After pining away for a new GPU since last September, I am on the fence. I am some days giddy with joy being able to play ultra 4K. Other days I think to myself this is just a GPU. Why was I so hot and bothered for so long...