For my husband's workshop, I was finally able to build them a new PC with my old 1080ti now that I have my precious 3080ti.  They use mostly CAD which is CPU driven and a great application of the Ryzen 5950X. I thought they might want to wait for the next gen Threadrippers but as they are limping by with an aging Alienware Aurora, the 16 cores of the 5950X is a huge upgrade for them. (And as building an AMD system was in my bucket list, I was so happy to build one.) 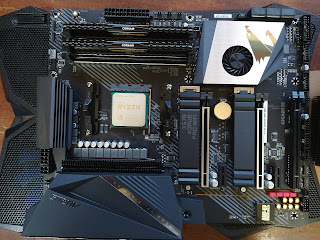 Originally we had a plan to buy a prebuild with a RTX 3090 and then swap GPUs- a really sweet gesture from my husband to make a bereft wife happy. Thankfully EVGA Elite Program saved us from having to suffer the vagaries of the system integrators.
For the mobo, I went with a x570 Gigabyte Aorus Pro, one level better than the Aorus Elite for better VRM components. It's not Gigabyte's upper tier or god tier but still places respectably on the A-tier of LinusTech's list.
Although PCs supposedly have the most future upgradeability, the motherboard and CPU tend to be the biggest limiting factor.  This CPU/mobo combo will never know the joys of  DDR5. Since there are no DDR5 compatible CPU/Mobos out in the market right now, one has to accept the sobering reality of being locked out of one of the biggest RAM upgrades to come.
(I myself am waiting for a DDR5 compatible mobo before I upgrade my i9-9900K even if there is no "practical" reason I need to upgrade my CPU. I'm definitely locked out of newer features like resizable bars even with my 3080ti which doesn't quite matter yet. None of the games I'm running are burning out the GPU just yet.)
Despite the recommendation from AMD to use water cooling, the world's best air cooler(Noctua DH-15) still does a fantastic job keeping the 5950X under 76C at full load. The Noctua is a robust workhorse beloved my many a happy air coolers including myself.  The 5950X for all it's 16 cores only has a TDP of 105 watts, not much more than my 8 core i9-9900K at 95 watts.  Intel has really fallen behind.

They were lucky that Noctua now provides a less conspicuous all black model instead of the hideous flesh and bark colored fans nobody likes.

As the case hadn't arrived yet, I loaded up the motherboard so I could still do all the open air tests. At first, I had forgotten all about the power button. I had to use a screwdriver to jump spark it.  Yes that is an otherwise useless laptop cooler being used as a mobo bench.

One thing I didn't like about AMD cpus is that they stingily provide only one average temperature, unlike Intel who provides a temp per core. They've got them in there,  just not available for the end user.  Now I can't be obsessive about my thermal pasting job and make sure cores are about same temps.  If there's anything I learned about top end PC builds, power delivery and cooling where you should spend the bucks.

I got them a massive full tower that could double as a rabbit hutch. Actually the Phantek Enthoo 719 is pretty deluxe and would be the case of my dreams.  The reason I got them something so big is more due to cooling flexibility. This has to run inside an extremely dusty metal shop where tiny metal shavings are common. We would have to put special filter paper over all holes. The larger case allowed us to get away with one intake and one exhaust fan. 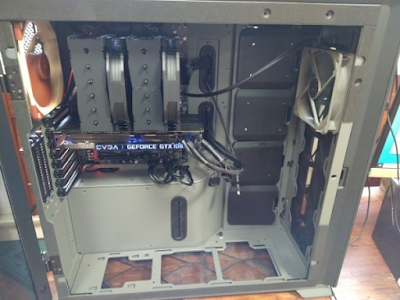 The case was designed to fit a baker's dozen worth of HDD drives or an entire extra ITX board.

Now the new PC is away working in full commission, I don't get a chance to futz with it in the same way I do my workstation. I just put in standard XMP at 3600MHz and sent it away without trying any other OC options.

I am itching to build another system. For the hobbyist, building a custom system is so much fun. It's been called adult Legos but the enjoyment comes from not only building but of course the operation and endless configuration, overclocking, custom fan curves, under volting. I recently put in a continuous monitoring system so I can analyze the historical data, a story for another time.

Email ThisBlogThis!Share to TwitterShare to FacebookShare to Pinterest
Labels: hardware