Joy of Exploration in Abzû

(Video for those who'd rather watch than read...)

I've been loving a visually spectacular game all week called Abzû.   Abzû is unlike most games out there as it's more of an underwater sensory experience than a traditional game.  The most gamelike aspects are a few undemanding puzzle elements.

You play as a silent nameless polygonal diver of infinite energy piecing together the mysteries of an ancient civilization. There is a story that guides you along a linear path but you can just vibe out on the mesmerizing graphics and soundtrack of this game. 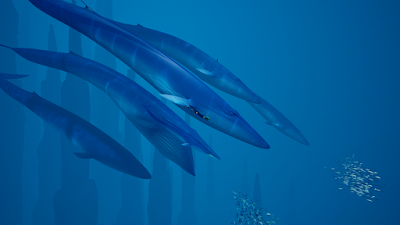 Abzû is not meant to be a realistic diving simulator, but out of any game I've played, Abzû evokes the delicious sense of awe, wonder, discovery I had when snorkeling.  The stylized visuals grants Abzû an dreamy fantastical quality.  The movement of the fish and schooling behavior is highly exaggerated and choreographed in a way consistent with the stylized artistry of the game.

Abzu winds you through diverse waterscapes from lush kelp forests, pastel reefs of plate coral, architectural ruins to the deep abyss.  I joyfully swam among giant schools of fish, orcas, dolphins, squids, whales, sharks, and every other kind of water creature you can think of.   If you use a controller, the diver will swim about with fluidity and expressiveness, it made me feel all giddy zipping around.  Even though this game is about 3 hours long, I played for an hour over 4 days because I didn't want to eat my cake all in one go. Instead of rushing through, I swam around each nook and cranny looking for starfish and urchins.

The sheer joy of Abzu is exploration and there is a lovely simplicity in the game design that makes leisurely exploration possible.  Wildlife is not trying to kill you. You don't need oxygen, don't need to collect resources or constantly look at your inventory.   There is a mild hazard zone in the latter part of the story.  You just noodle around and from time to time you activate portals.  With Abzu, I felt genuine anticipation and excitement going from one space to another as you never knew what wondrous sight would dazzle you next.

I would recommend this game to pretty much anyone who has eyeballs.  Abzu is thrilling and calming at the same time.  Abzu is such a feast for the eyes and I am so grateful such creativity exists in game form. 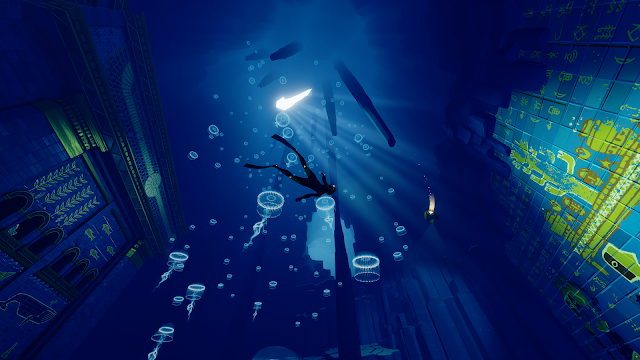 The word Abzû is based on the Sumerian words ab for ocean and zu "to know" translated to "Ocean of Wisdom".