Preparing for No Man's Sky VR

In anticipation of the summer's BEYOND update to No Man's Sky which adds VR support, I started playing the pancake version mostly at night as a way to unwind from the day's chaos. There's a relaxing simplicity to hopping on your spaceship, choosing a star on the map and warping into a different star system. I'm not forced to be part of some morally complex space opera but just a hapless casual tourist.  I don't think I had this much fun exploring, jetpacking,  ripping around in a pilgrim(an exocraft motor bike) in a space game in a long while.  I played in creative mode to avoid the grind altogether just hopping from planet to planet, looking for a good home planet to build a base on.

I had low low expectations due to the flubbed launch from Hello Games few years ago and I was immediately struck by what an incredible achievement this is for such a small indie shop with 20 humans working on NMS. Youtuber SkillUp dinged this game for not having memorable curated world spaces but this is not what NMS is about.  Everything - planets, plants, animals, spaceships are all procedurally generated and can at minimum produce some truly interesting combinations to be enjoyed as a casual space tourist.  Some planets are so outright bizarre- a toxic desert planet with jumping mushrooms was quite a head trip. I had the chance to fight pirates in order to gain a freighter but it seems too much responsibility for now as I just like planet hopping without worries.

One of my favorite planets was built completely out of hexagons. It becomes a tricky mini game to maneuver around in a 4 wheeler. I could rip around in my motorbike but where's the challenge in that. Actually I've started feeling like I am trampling fragile ecosystems when I go on a wheeled rampage and there were a few times where I just abandoned my wheels for walking and erstwhile jet-packing. 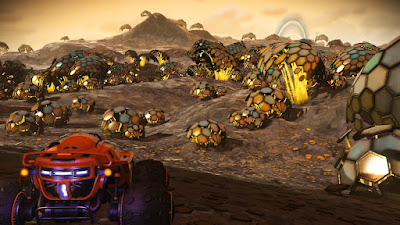 The night cycle on the hexagon planet was surprisingly exquisite, I cannot wait to visit these places in VR and NMS is currently the only VR game I am anticipating in 2019. I've only thus far nibbled off a tiny bit off the NMS galaxy not touching combat mechanic or base building and am so excited something more meaty is coming to VR. 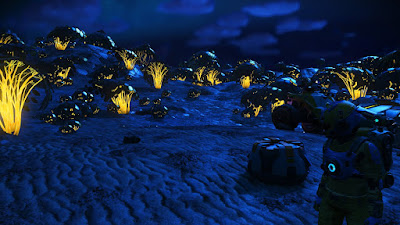