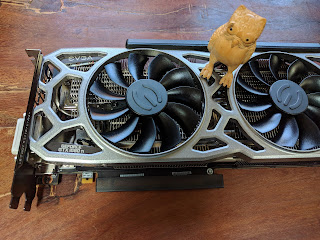 After finally getting my grubby little paws on a GTX 1080ti,  I was sorely sorely disappointed I had set myself up so hard.  When you plunk down a sizeable outlay of gold for just a GPU, you really have to ask yourself honestly, how much more enjoyment will you reap on a speedier GPU. And the answer now I surprise myself with is "not that much more".  Considering that I now spend most of my precious gaming time on a PS4 with Red Dead Redemption 2, I guess my gaming life would have been just as rich had I stuck with my serviceable GTX 1070.  I upgraded in preparation for the Pimax 5K+, but I realize the OG Vive is still lots of fun. But really, I ain't got no time to be under a helmet when RDR2 is so fabulous.
SkyrimVR is unstable as before- crashing in 30 min intervals. Still can't have Apachii Divine Elegance Store, no bikini armor- can't have anything nice...  (Actually I don't approve of bikini armors but I'd like to have these mods ready in case male friends visit and want to see the full charm of modded Skyrim.)  But my SkyrimVR problems are not GPU related- it must be the aging Bethesda engine not meant to run 200+ mods despite having 11GB vRAM.  It falls over even before it reaches 9GB use.  Probably I need a clean character build but after 300 hours of grind, I loathe the thought of starting over.

Yes I can run with much higher 2x SS settings. I can run ENBs now but this is not reason enough for $1000. Stuff looks somewhat better than a 1070(though the Vive Gear VR lens swap made the biggest difference in clarity), but I realize I was utterly enraptured with the magical fantasy world of SkyrimVR even before this upgrade. 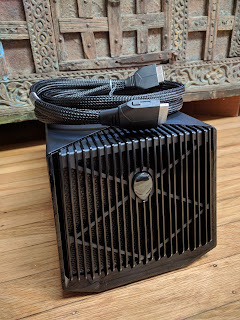 Kingdom Come Deliverance definitely needed the extra horse power to run 4K, otherwise the stuttering really ate into immersion. But playing at 1080p was still enjoyable.  4K Witcher 3 runs amazing with 1080ti, but I was still amazed even with lower fps.  My $1000 lesson is that raw GPU speed may not take your enjoyment that much further because it's engaging game play and not the most hyper realistic detail that will win your imagination. I grew up on 8 bit games, even text based ASCII RPG games which were strangely thrilling. And now that I've been completely absorbed in Red Dead Redemption on a dinky PS4(1.84 Teraflops) while  my 1080ti(11.3 Teraflops) dusts away, I happily realize I have no need to upgrade to an RTX.

From a technical point of view,  I am still impressed you can run a laptop with an external GPU. Probably the best part of this upgrade is keeping the core laptop motherboard cool.