In the fall of 2016, I treated myself to a new Alienware 17 R4 with a GTX 1070 after limping along a few months with my HTC Vive on a subpar GPU.  This R4 has been a champ for most VR games in the last two years until I started modding SkyrimVR heavily.  I don't need buttery performance on pancake 4k games-   I enjoy amazing artistry and story telling so much on the Witcher 3 I haven't actually noticed the suboptimal fps.  However low frame rates and reprojection in a high-action VR game is not just a buzz kill- the ensuing nausea kills the session and queasiness lingers enough to avoid VR for days.  Also I spend hours agonizing over my load list and cutting mods when I want to try out new mods.

I could cut out all those greedy Skyrim mods- who needs realistic rope and individual straws in hay bales anyways or... Or I could get on the treadmill of nextgen hardware upgrades. With Pimax 8K headsets coming up and with the sale of new RTX gpus,  I had sweet sweet visions of prancing around Skyrim with 200 degree FOV in second generation VR gear.

One ponders heavily the wisdom of spending thousands to get realistic immersive virtual grass.  Gamers are often in a spectrum of spend guilt. I personally am a huge believer in video games as a positive force for growth and development.  I had some dubious mental calculation about never having wasting money on cable TV- this must have saved at least $10K in the last 10 years.  I also had dutifully saved up some septims to buy the Vive Pro which just didn't seem worth the effort.

My decision tree went something like this.
1. I need more VRAM(because 4K environment textures DO make a difference) and that would only be GTX 1080ti or RTX 2080ti with 11GB over the standard 8GB.
2. A bigger fork deciding over a brand new spanking desktop or use a external gpu on my Alienware R7.

New Box or eGPU?
My hard working husband(so sweet guy) who knows how much I love marveling in a VR fantasy world has offered to buy me a top of the line Alienware Area 51 with the RTX of choice. Area 51 currently comes with with an RTX 2080 OC (overclocked mode) with the 2080ti probably coming out later in the year when the supply of 2080ti increases.  The only reason I stick by Dell and Alienware instead of building a custom rig is for the 5 year support plan since these beast gaming machines are more prone to failure.  I've only had to replace the motherboard once in the last 2 years.

Alienware AGA vs Thunderbolt eGPU
It was time to call in the AGA(Alienware Graphics Amplifier) option.  AGA hands down is faster than thunderbolt 3 since has direct dedicated connection to the motherboard unlike the thunderbolt 3 which has to share the PCIe switch.

RTX 2080ti vs GTX 1080ti
Obviously if money was not an issue and one could get your hands on a RTX 2080ti, you would spare your brain cells of the excruciating price to enjoyment analysis.  Although such funds are ample in my piggy bank, I totally frown on paying the "must have latest greatest gpu" premium charged in the first months of a gpu's initial release.   On getting a 2080ti, I don't believe my future enjoyment of future games will have that much to do with ray tracing or DLSS.

If I think of the most amazing games I have ever played in the last 10 years and some of them not even 3D like Samarost 3, hardware ray tracing in no way would enhance these games.   But also triple AAA publishers- those who have the budget to potentially take advantage of the RTX, may not take the risk in something so proprietary for NVidia that requires such expensive gpus.  Game companies have to sell to the widest audience - that includes consoles which have no hope of hardware ray tracing in the next few years.  The GTX 1080ti which is still almost ~50%  better than my 1070 but may be barely adequate for a Pimax. There is the overhead loss of course of 10-15% in not directly plugging into the motherboard but 1080ti upgrade seemed a good compromise.

(Update- at launch, it wasn't exactly clear what DLSS was and finding out about it, it's even worse than I thought and totally useless for most of the games out.  The game developers have to send in "data" to Nvidia to have them crunch the data through hyper expensive NVIDIA's DGX SaturnV supercomputing cluster to build a learning model.  DLSS demos really show subpar results esp. with images having text- not great for VR.   Games I play- heavily modded games, older titles, and indy games- will never have RTX version of DLSS nor could it.  DLSS is misleading since it's upscaling from 1080p. DLSS2 is running 4k native. Not clear how it would impact VR games since none has been modified and foveated rendering is a better solution. )

MSI vs Gigabyte vs EGVA- form factor, thermals, noise, etc...
Even when one decides on a gpu, you still have to go through the gauntlet of graphics board selection.  MSI, Gigabyte, EVGA were the 3 aftermarket manufacturers I considered due to their improved cooling systems. There is the problem with form factor as the AGA chassis allows for only 2 slot cards and MSI/Gigabyte had 2.5 slots. I read on the board the 2.5 slot cards do fit but you cannot fully close the top and I didn't want my board being prey to dust.

The clincher was EVGA's upgrade program so if I wanted to jump to a 2080ti in the next 3 months, I still had the happy option to plunk down an extra $500 to do so. 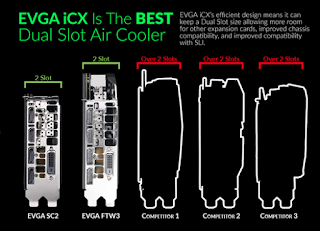 Which EVGA 1080ti Model: SC2 vs FTW3?
Even when you chose EVGA 1080ti, you still have the final and last gauntlet of model options, FTW3 SC, SC2, Black Edition GAMING, SC2 Hybrid...  careful weighing of cooling options ICX Cooling vs ICX Technology, 2 fan vs 3 fan. I opted for ICX SC2 Gaming which had the 2 fan smaller form factor but still the 9 temp sensors and asynchronous fans.  You can see gamer nexus deep breakdown here:
Who to Buy from: Amazon vs Newegg
The final hurdle- where to buy this EVGA 1080ti SC2 Gaming. I looked on Amazon and one of the reviewers said be weary of used cards in crypto mining that had been returned and repackaged. I decided to buy it from a place with a stringent GPU return policy so I bought it non-refundable directly from newegg(and not an affiliate vendor).